So VMM 1807 was just released yesterday and there is not a lot of new features in this version, as I think the VMM team is focusing on support for RS5(2019) and new features for it.

The agent installation is a part of the Server install and can be pushed as normal from VMM after upgrade of server. But for some of the features you will need to upgrade console also.

If we look at some of these there are some nice new things.

Now this is something we have been waiting for a long time. The possibility to store a disk on a different CSV when creating the disk in VMM. Before we had to create the disk and then migrate that disk to another CSV. Which is not a good solution. 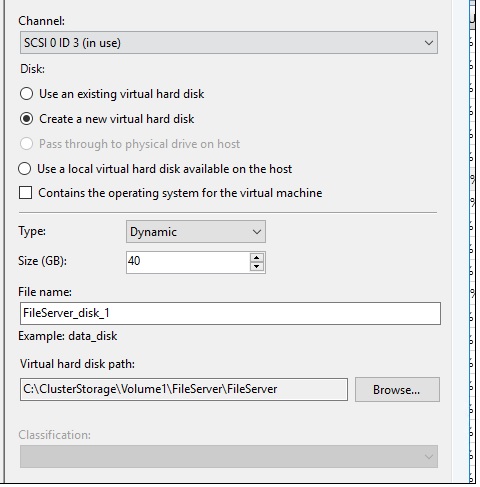 This is also a new feature we have been waiting for. Having to create a new set switch and then migrate over was a pain. The steps are the same as converting a standard switch to logical switch.

Now this feature is pretty cool. The VMM team has implemented a lot of logic in the patch procedure of a S2D cluster to count for disk repairs that happens when you patch a S2D cluster. And it works pretty good.

For this to work you need to have your WSUS connected to VMM, so I will assume you have this already.You start by going to the Fabric Pane, and click on the Compliance tab, then click the Scan button on the cluster or nodes you want to patch.

Then it will start the steps, notice the new steps Wait for cluster spaces of Storage Spaces Direct to be healthy and it will start to install updates

Once the update is done, it will reboot the computer and Start a compliance scan of the host to check if it’s ok and that the cluster is healthy before resuming the node.

And it will repeat the steps until it’s finished on my nested S2D cluster it took about 3.5 hours to complete. Where most of this time is waiting for patches to install and waiting for the OS to restart with the new updates.

There where also a big list of bugs fixed in this new version.