I have been starting over and over on this blog post since nov 2017 wich coinsided with me chaning jobs, wich i again just did in april of 2018 to work soly with S2D, VMM, Azure Stak and other datacenter products. So i thought it was time to get this done.

Over the last 6 months or so, one of the frequently asked questions i see and get is how do i patch my Storage Spaces Direct(S2D). When it comes to patching a failover cluster with S2D enabled it is basically the same procedure that you patch any Failover Cluster, but there are certain things you need to be aware of.

I will cover both ways of doing this and cover the important things to keep an eye on when patching either manually or with CAU.

How we did it before

Normally when you patch a Failover Cluster you do the following.

How does Storage Sync work in a S2D scenario

Now things are abit different with S2D as you are doing HyperConverged or Converged, and your storage is spread out over several nodes from 2-16 nodes. When you reboot a node during patching, all storage writes that happens will not be written to this node. When the node is back online again S2D will trigger a sync of the data that was written on the other nodes to replicate out the mirror or parity bits that is missing on the node that was booted. It starts a repair job of the virtual disks to make sure that in a 3 way mirror all data is copied out on 3 different nodes. As 1 node is down, in a 3 way mirror there will be blocks that are not 3 way mirror until the node is back up and the repair of the virtual disk is finished. You can see these jobs with the command Get-StorageJob.

You will need to wait for these jobs to finish before you can pause another node. Depending on your solution and size of changes, this can take from minutes to several hours.

As of September 2017 changes where made to how the synchronization of data to the Paused node is done.

What happens now is that when you pause a node, all changes will still be synchronized to the node while it’s in a Pause state. To fully set the disks in Maintenance mode, you will need to run this command.

You might need to use the Unique ID for the storage enclosure for getting it to work.

For normal patching this is not needed. I have done HBA firmware and driver upgrades without any issues. But i always recommend to do this outside of business hours. And always have a backup, Murphy might hit you in the head. And id rather not be the person telling the CEO that the most important system they had went down as you where doing patching during day time.

The manual way of patching

This is my preferd way of doing it right now, but stay tuned for an update on how to create a fully automated script some time in the future.

Manual patching requires a user to do steps and to check in from time to time during patch cycle. And the steps are as follows

Some tips when patching, there have been reports of CSV’s and VM’s going into pause mode as a node is being rebooted. There is no good explanation to why this is, but the best guess is some mismatch in binaries between the prev patch and new patch causing the CSV to have a short 1 sec pause. Which also causes the VM’s to pause for that same time. This can be annoying but will not cause any problems for your VM’s as of 2016 VM’s can go into auto pause if it looses connectivity to the storage. It’s like if you manually pause a VM, but it will auto start the vm again once it has access to the storage again.

Cluster Aware Updating has been around for quite a few years and a lot of people use this for patching any kind of Windows Server Clusters. For S2D it’s not the best thing in the world. It patches your servers without any interaction. But it has no alerting if anything goes wrong. It respects the cluster health alarms so it will stop, but it can leave your cluster unhealthy without alerting you. When setting up CAU you have the options of defining how many nodes can be unhealthy before it stops. In anything less then a 8 node, that number needs to be max 1. From 8 to 16 nodes it can be 2. But what happens if node 1 and 2 fails. It stops and you will need to figure out what’s wrong. Now the issue here is you have 2 nodes down and not working properly. What happens if a 3rd node goes down. In any scenario it will cause problems. So my recommendation is to leave it at 1 failed node before stopping if you wan’t to run CAU.

So how do you configure CAU, it’s a pretty simple process, and do not have too many options to tick off. Make sure RSAT-Clustering-AutomationServer and the other Clustering tools are enabled before you start CAU configuration. 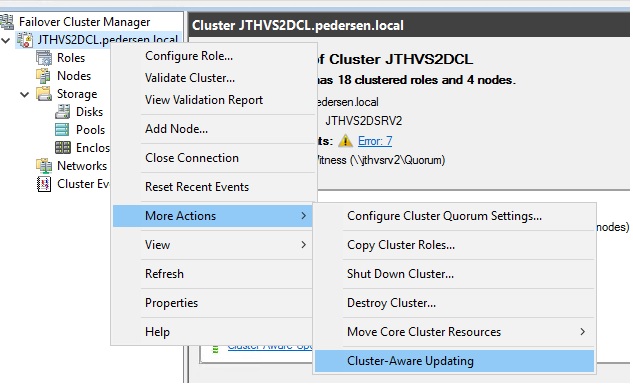 Then you will get this picture, here click on the Analyze cluster updating readiness 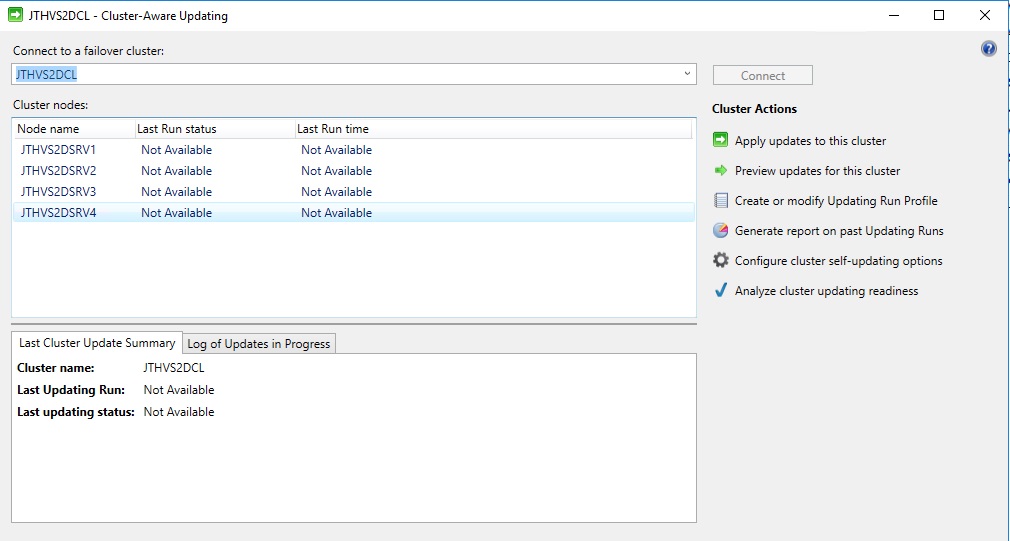 This cluster did not have the tools or the CAU role installed so it was giving some warnings. The CAU role is setup during the first CAU configuration. 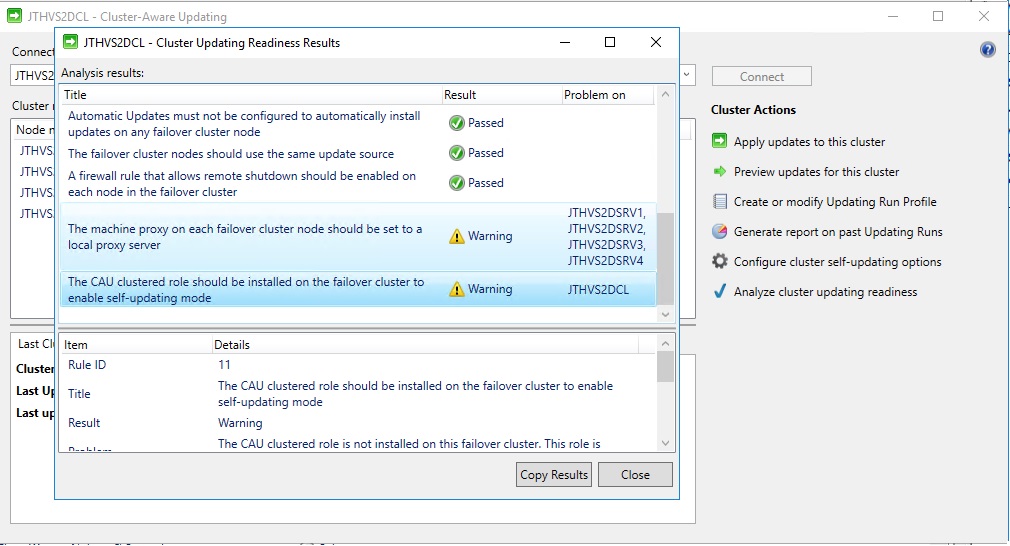 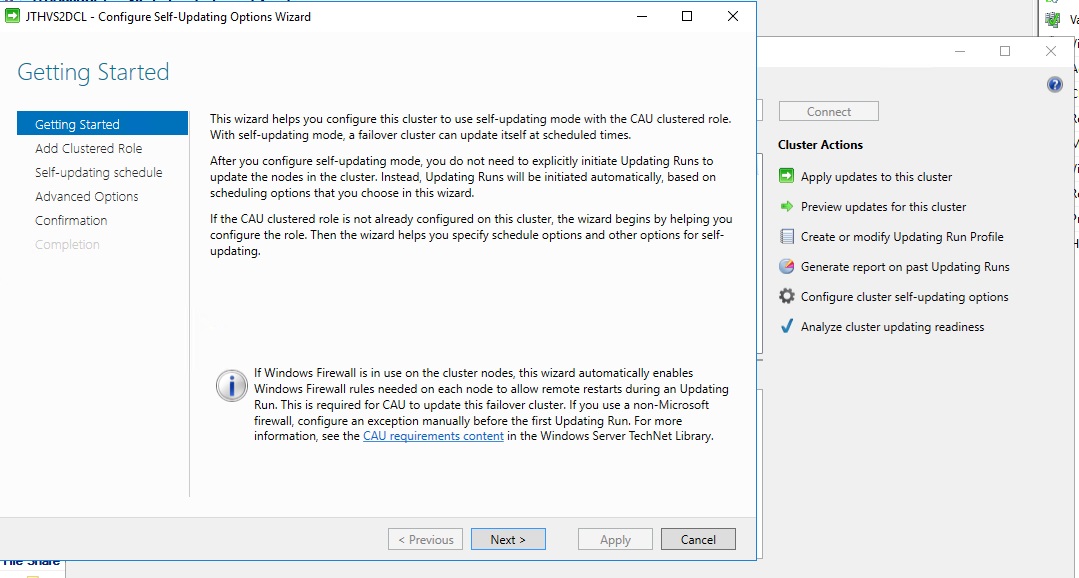 Click next and enable the CAU role during installation. Then next again 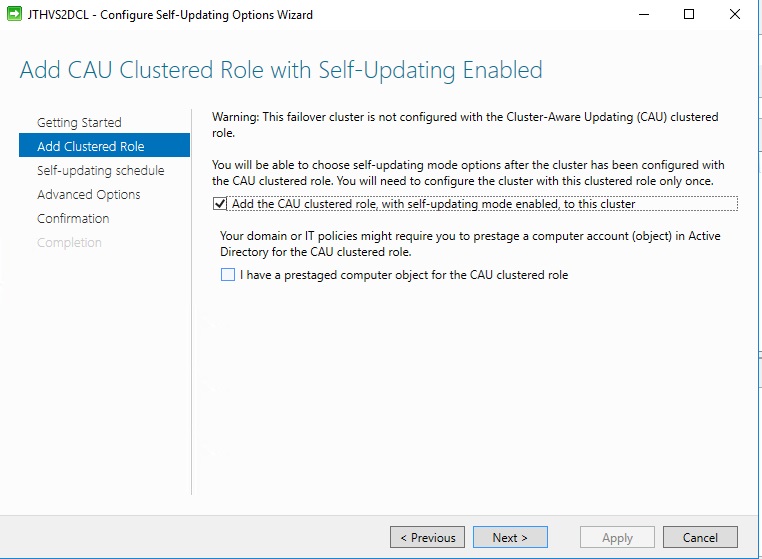 Define your schedule when you want it to patch. 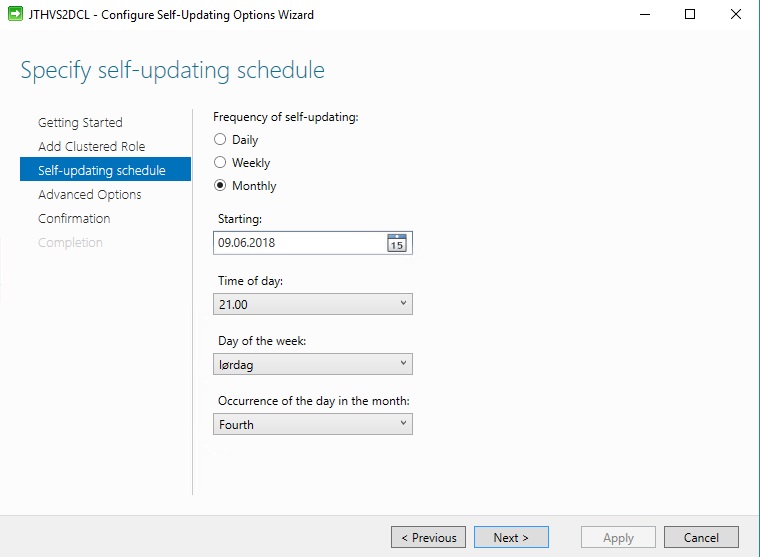 On this page the most important steps are. Make sure you set the MaxFailedNodes to 1 and to RequireAllNodesOnline to be checked. You can also define in which order the nodes are to be patched. And you have the option of running pre and post update scripts for some notification and check solution with CAU. 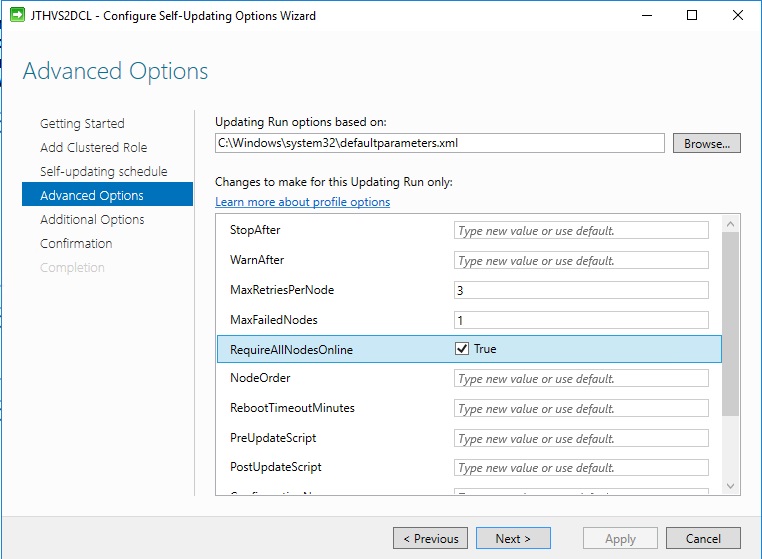 In this next page you can specify if you want windows update to install recommended updates as well. 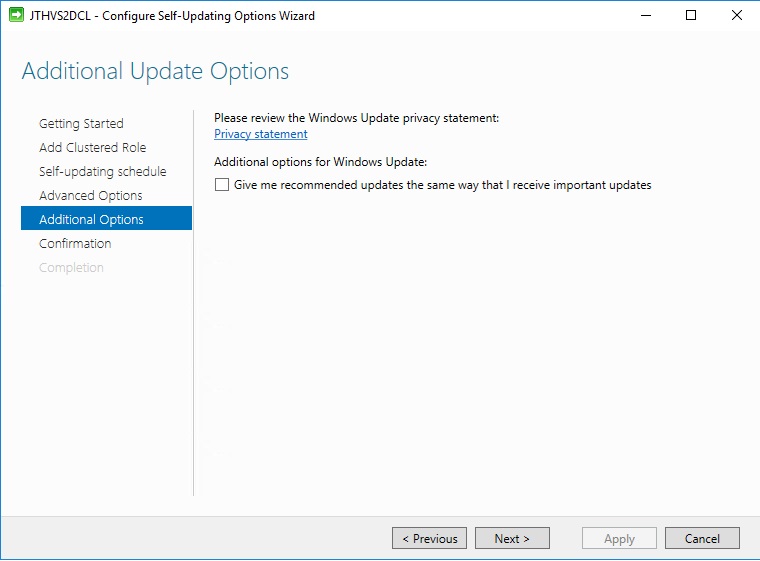 And in the last Window we apply the configuration script for CAU and we are done. 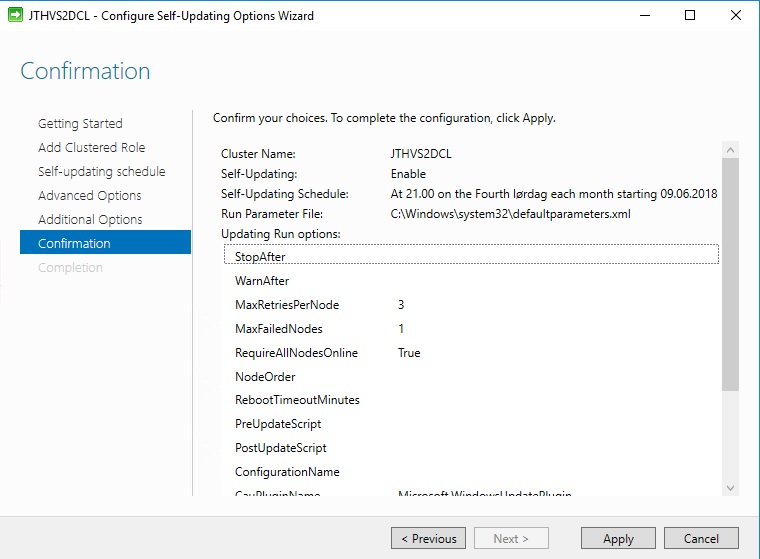 Now you can just sit back and relax and come back Monday morning and hope everything is ok. Or like i would do check in from time to time and see what is going on.

Both way’s will require you to pay attention to what is going on. The manual way do require more hands on but it gives you more flexibility if something happens.